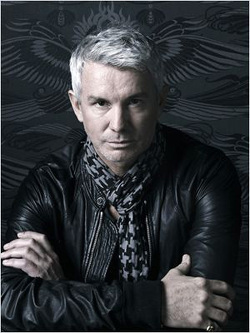 "It's called "Red curtain" because that's just a simple way of saying it is theatricalized cinema. Now this theatrical cinematic language has very direct roots in the films of the thirties and forties. This is a time when we're looking at films like Citizen Kane, Singing in the Rain, Top Hat. The cinema of that period is not naturalistic. The mark of how high the art is in the artifice. It's what I call the big lie to reveal the big truth. It's clearly a heightened cinematic language... Naturalism tends to put the the audience to sleep. It invites you to forget yourself and believe that your'e looking though a keyhole into a room and onserving the reality of someone's life."